In Praise of Nacho Libre 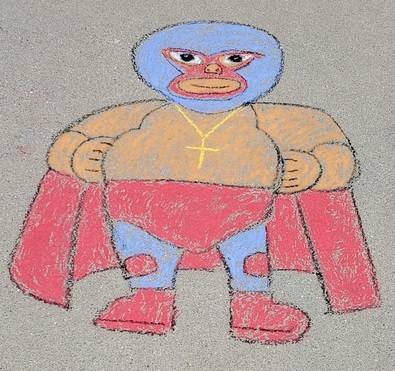 I’m 48 years old, knocking on the door of 49, and I regularly reflect, throughout each day, on the story of Nacho Libre. Ancient cultures had myths and legends, stories of epic adventures and divine guidance to give their lives meaning, and I find direction from a 14-year-old movie of a monastic brother who moonlights as a luchador. I get it; I can see age 50, half a century, coming down the tracks, and I’ve still got this goofy movie running through my head. Of all the things that would inform a life, most wouldn’t settle on a barely remembered comedy from 2006. I think about the movie, though, all the time. Quotes from it run through my head. The ringtone for my phone is Hombre Religioso by Mister Loco, the featured song of the movie, and my notification sound is a quote from the movie character, Ramon, and so I hear throughout the day him asking, “Where are the chips? Did you not tell them they are the Lord’s chips?”

Here’s the movie’s story without any spoilers: Jack Black plays Ignacio, a monastic brother who lives in a small community of monks who run an orphanage in Oaxaca, Mexico. Ignacio, we learn, was orphaned as a young child and grew up in the orphanage. While he was still young he was placed in the kitchen, cooking for the community, a job he dislikes but still tries to do despite the fact that his kitchen budget is insufficient. Although Ignacio continues on in his duties, he dreams of being a luchador. Eventually, he partners with a street kid, Esqueleto, to begin secretly wrestling, and Ignacio takes the luchador identity of Nacho Libre. Although they don’t, in the beginning, succeed in the ring, Ignacio continues to wrestle with the hopes of getting “a little taste of the glory,” but also in the hopes of winning the heart of Encarnación, the new nun who has come to the community to teach the orphans.

I could tell you so many things that are delightful about Nacho Libre. The soundtrack is wonderfully quirky; the movie, as silly as it is, is artfully shot. It has many lines that still make me laugh (“They think I do not know a buttload of crap about the Gospel, but I do!”). Still, though, I think, “This is a movie about a Catholic brother who moonlights as a local wrestler.” But--and this is the extraordinary part--the movie is based on a true story. The movie was inspired by Father Sergio Gutiérrez Benítez, a Catholic Priest who ran an orphanage and started wrestling as Frey Tormenta (“Friar Storm”) to raise funds for his orphanage. As strange and as goofy as the movie is, I remind myself there is a true story behind it all.

All of us play a role. There are meanings in the roles we play; they’re not without some purpose. Whether it's a family role or a vocational role, we all play a part. Whenever I’m done with my visit with my physician, I don’t say, “Thank you, Steve,” or “Thanks, Cindy.” I say, “Thank you, Doctor,” knowing this person has chosen and been trained to play a particular role in my life, not as a friend who gets coffee with me but as a person who is certified to treat my health. The role has meaning and power. But, roles can be constricting, too. We often fail to see the person behind the role, or as Ignacio says, “Beneath the clothes we find the man.” What is more challenging is if we didn’t choose the role or if we too quickly accepted a role that we really didn’t desire. Sometimes others’ definitions of our roles constrain us, too, where we’re expected to be something we’re not. Ignacio’s moment of change comes when he is criticized for his role as the cook, something he still tries to do with an insufficient budget because he loves the orphans. His response is, “Maybe I am not meant for these duties. Cooking duty. Dead guy duty. Maybe it's time for me to get a better duty!” He then runs from the monastery to secretly begin his career as a luchador.

It’s a story that has been told before, but I cheer for it every time. It’s the story of someone claiming his own path. There’s another barely remembered movie from 2006, Stranger than Fiction; but I still remember this scene when Will Ferrell’s character really began to live his life. I see that scene and say, “Yes!” I’ll stand up and cheer for that story every time. I not only cheer for Ignacio, but I cheer for every person who claims her or his life, who chooses to be the author of their own story or the “gatekeeper of my own destiny” as Ignacio says. Maybe when I cheer for Ignacio, putting on the Nacho Libre mask and choosing to no longer accept the role put on him, maybe I’m cheering for myself, too, when I claim my own story rather than a way another would define me by my roles.

A few years ago I had surgery. The night after the surgery and the next day were difficult. Surgery knocked my body and mind into a deep funk of pain and misery. I found a moment of change, though, where I got up from the hospital bed. I called down to the nurse station, asking for someone to help me go for a short walk. A nursing student came a few minutes later, and she and I went for a short walk, probably no more than 30 or 40 yards. Out in the hall I found a rack of DVDs. I, weakly standing in my hospital gown with my bare legs peeking out beneath, grabbed for the story that would take me out of my misery and lead me forward to health. I didn’t settle on any assumed movie classic, no Godfather or Citizen Kane. I reached for the movie that would call me back to strength, for the “Eagle powers come to me!” You know it without me saying it; the movie that called me back to health and life, as it still does every time I watch it or think about it, was Nacho Libre.