For Elaine, who prayed for me to keep writing 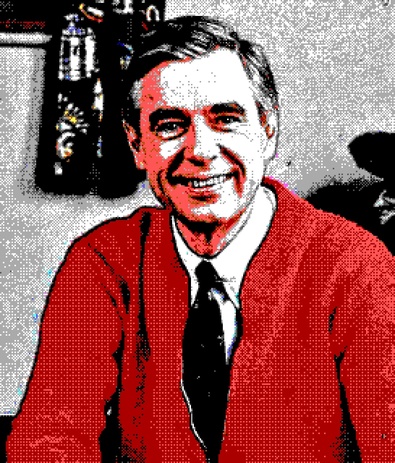 (I started writing this a couple weeks ago, before the COVID-19 news really ramped up. We're thinking about different things right now, but I thought I'd still share it)

When I saw the video of a child teaching Mr. Rogers the wave, a basic breakdancing move from the ’80s and Fred Rogers does the move with the fluidity of C-3PO, I wrote it off as an older man not realizing how silly he looked. “This may not be your gift, Mr. Rogers,” I snarked. A social media friend had a different take. My friend talked about growing up in a single-parent home where his mom was more interested in regaining her pre-child dating life and wasn’t a regular presence in the home, but my friend said here was Mr. Rogers, this kind, curious man on television every day for him. My friend watched the video and, instead of seeing an awkward older man, he saw a generous, open soul, ready to learn from the world around him and encourage the good in another. He remembered the stability and kindness Mr. Rogers brought to him in his childhood, even if it was only through the presence of television. I thought, hearing my friend’s perspective, “Maybe there’s something for me to learn here.”

My memories of watching Mr. Rogers as a child are vague. I know I watched him; I remember the opening sequence, the trolly, and the Land of Make-Believe. I too quickly moved on to the type of kids’ programing Mr. Rogers disliked, superheroes and adventure shows. I think I left Mr. Rogers’ Neighborhood for the galaxy far, far away from Star Wars. I grew up in a stable, loving home, and maybe I didn’t need Mr. Rogers at the time; his type of acceptance and love were there for me without him. I really didn’t think seriously about Mr. Rogers until my friend mentioned how much he relied on Mr. Rogers in his struggling home.

Mr. Rogers is experiencing a comeback now, a second act here 17 years after his death. Much of the curiosity comes from the movie, A Beautiful Day in the Neighborhood, where Tom Hanks plays Fred Rogers. I wonder, too, if his resurgence comes because we’re craving thoughtfulness and empathy, and Mr. Rogers embodied those things. My wife and I watched A Beautiful Day in the Neighborhood a couple of weeks ago. I expected only an evening’s entertainment, but by the time it was over I realized something affected me. I know it was a fictional work, based loosely on an actual relationship Fred Rogers had with a journalist, but even with a mostly fictional story, I was affected by how the movie portrayed Fred Rogers’s way of being, his curiosity and empathy. In the movie Fred Rogers wasn’t just the star of a popular children’s show; he was also someone willing to drop everything to be with children and adults who needed him. When we finished watching the movie I thought, “I want to be better.”

I get caught up in the spirit of the day. We’re in the Presidential Election season in my country, and it’s not a gentle season. We’re asked to examine the qualities of possible leaders, and as we do we celebrate takedowns in debates. We watch as candidates rhetorically thump their chests at one another. Our current president begins his day venting his resentments on Twitter. I would like to think I live above all that, but I get sucked into it all, the hate and resentment that we seem to drink from so freely these days. I broadcast my resentments regularly: those I don’t like, those who didn’t do what I thought they should, those who just don’t understand me. I tell myself the problems are out there, it’s the hate whoever else holds, but maybe I’m not a stranger to that hate. Resentment and distrust are too often my beverages of choice from which I drink freely and unquestioningly.

But here is Fred Rogers, teaching us to be curious, to be open, and to trust the value each of us has. Watch this video of Mr. Rogers visiting with Jeff Erlanger, a young boy who uses a wheelchair. I see the two of them singing It’s You I Like, and I think, “Whatever this is, I want it.” I want this openness to a different experience. I want his ability to cherish one whom our society marginalizes. I want people like Jeff to find this type of openness in me. I see this and I think, “I want Mr. Rogers as President.” I know Mr. Rogers has been gone from this earth many years now, and he mostly eschewed the political realm in his time (though he did successfully plead before a congressional committee for funding for PBS). I see Mr. Rogers and what I wish in the most visible place in our country are his thoughtfulness and gentleness. Many would respond, from both ends of the political spectrum, that the challenges of the world are so great that we need a fighter, someone who will vanquish the other side, and maybe there’s something to that. I worry about climate change. I worry about people being able to afford healthcare. I worry about a very few getting most of the collective pie while most getting left with crumbs. I want an answer to these problems that works for all. But I have to believe that none of that can really be achieved without some respect for all, without a generous spirit that cherishes the goodness in every person. Can the good we ache for, we fight for, be achieved without a dose of what Fred Rogers brought us? I doubt it.

I know I won’t get Mr. Rogers for President, but that’s what I’m voting for, at least in my heart. Maybe I didn’t need Mr. Rogers as a child. I sure do need him now.