Wasn't built in a day

But you can get there in a day

I made it to Rome, and now after catching up on my sleep I can think clearly enough to write about it. I took a plane from Chicago to Dublin, and after about an hour and a half in Dublin another plane brought me to Rome. The shuttle bus that took me to my hotel broke down on the way (I think its transmission went out), but they got another bus there right away. With my bags at home in the hotel room I decided not to waste the rest of the day, and, although completely sleep deprived, I set out into the city. 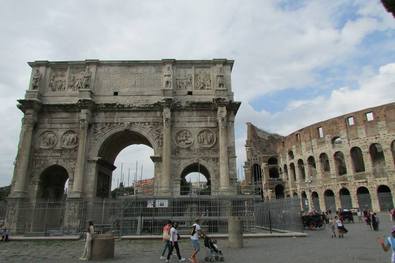 I figured out the subway and made it into the center of the city. I checked out a church, Basilica San Clemente, and I walked around the Colosseum and the Arch of Constantine. My goal for the day, though, was to see the Museum and Crypt of the Capuchins. When I was in England last summer, I discussed mortality with a new friend there, and my friend told me I needed to go to this in Rome. The upstairs is a nice museum dedicated to the Capuchin friars. It even has a Caravaggio painting. The real attraction is the crypt. 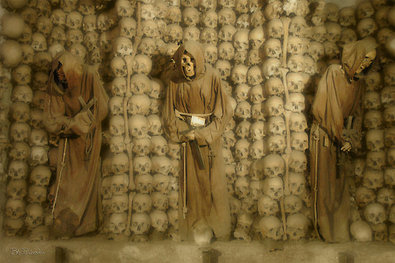 One of the Capuchins arranged the bones and skeletons in the crypt into decorative designs. Hundreds of skulls and bones are piled together to make designs. One room was mostly skulls, another was pelvises. Skeletons are dressed in Capuchin robes and are a part of the scene. It's all shocking, clever, and a little weird. There is a sign, at the beginning, that says in several languages, "What you are now, we once were; what we are now, you shall be." That's a serious thought to take with me through the rest of the trip.